When Comics Really Were Just For Geeks

Rainy day blues and nothing to do? Visit our vintage comics trunk, where we just dig up old rags and chew on them with absolutely no point or purpose.

For those of you quarantining after the end of the world, have you run across your old attic cardboard box full of comics yet? No of course not, mom sold them all at a yard sale as soon as you moved out to college, right? That’s the same sob story everybody tells. Luckily, your Uncle Pete (here he goes again!) remembers when comics were a lot dorkier than they are now. This is because I took the precaution of selling my mother at a yard sale before I moved out to college.

I kid! I’m kidding. But for a break from everything, let’s just retreat into a random pile of old comics and gawp at how batty they used to be. No deep lessons this time, this is a “just for fun” post. 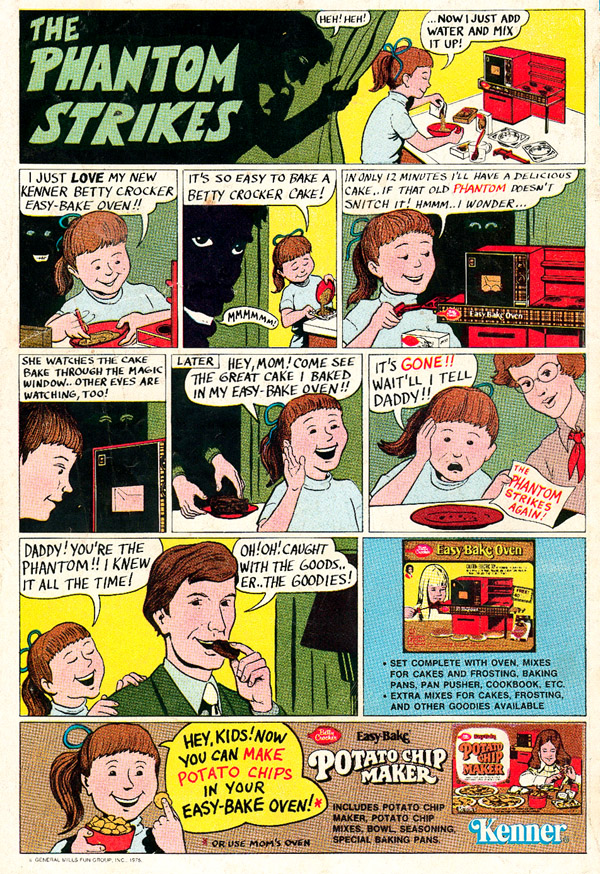 That’s Kenner’s Easy-Bake oven, from the time before Kenner toys landed the contract to make Star Wars figures. And now you know the rest of the story! This ad got reprinted in a bajillion comics back in the day. It was just as well Kenner got into the Star Wars figure business, because as cute as the Easy-bake Oven was, it was basically a light bulb in a hot-box with powdered goop that cooked into the same gummy wad of sugar and chemicals.

More rare were local interest ads targeted at teens, like this CIE ad. Which, by the way, still exists, Cleveland Institute of Electronics. Electroman is apparently supposed to have lightning bolts for ears, but he just looks like a sad chihuahua.

Hostess Fruit Pies, Twinkies, Ding Dongs, etc. got a plug from every Marvel character who could talk. I didn’t mind this one, because of the line “You like to roll? OK, roll!” Hulk go sick burn!

Many more vintage comic ads here at Mental Floss, including the ubiquitous Sea-Monkeys (spoilers: They’re shrimp). We’re moving on, this has been done before.

Harvey Comics were a thing that defied all explanation

Seriously, who bought these? They were bland, forgettable, and so cheap that they came free with everything. Nobody remembers the Harvey Comics universe now except for the two characters that actually got movies, Richie Rich and Casper the Ghost. Did you remember along with the ghost, to add in Wendy the witch and Hot Stuff the devil?

No? How about the “failed” (compared to the “smashing success” of Hot Stuff) titles like Jackie Jokers? Or the positively psychedelic Little Dot?

Jackie Jokers whole gig was that he was a little boy who wanted to be a comedian, but he wasn’t funny enough. Little Dot’s gimmick was – are you sitting down for this one? – she wore dotted dresses, and most every story about her involved some interaction with dotted things. That, and she bore an uncanny resemblance to a childhood version of pin-up model Bettie Page.

There’s tons more to the Harvey Comics universe, even enough to fill a Wiki. The thing that defied all explanation was who were their audience? With vaguely unsettling topics like witchcraft, ghosts, and a devil, parents groups sometimes picketed the publisher. But mostly, these comics were uniformly bland, sweetened to diabetic levels, and aimed at the same demographic that would rather read the Archie universe. We could spend all day documenting the zillion cartoons and movies still spinning out of this label to this day, but literally nobody would care.

True Crime comics were extremely over the top

As we mentioned in our richly informative Batman piece, comics stemming from the 1930s tended to focus on detective stories. Random example:

Now you know where the expression “Sam Hill” comes from. Anyway, the true crime genre was justified by the mores of the time as teaching moral lessons that crime was bad (jeepers, really?) so they could get away with progressively edgier material.

We think of Frank Miller’s turn as making these comics “darker and edgier,” but friends, feast your eyes on this number:

Why, that appears to be a man who is trying to burn this woman’s head off over a gas stove, egged on by a Haunted Mansion ghost over his shoulder, while a cop lurks outside the window wondering if he should step in at this point. Grisly stuff like this graced the cover of the whole series, which actually existed. The ghost dude was “Mr. Crime,” a kind of tempting spook who would inspire people to give in to their baser impulses such as throwing kitchen safety to the wind.

D.C. (it stood for “Detective Comics”) actually dialed it way back from this. And yet, D.C. is still remembered today for…

D.C. made a career out of messed-up stories

D.C. comics, again, have a reputation now for being a dark universe, credited to the Dark Knight movies and the playground shenanigans of Harley Quinn and company. Ha ha ha, you call that dark? Remember when Superboy found his dad had HUNG HIMSELF?

That barely even qualifies as a fluke in the DCU these days. Looper documents some of the more traumatizing story arcs, but you could fill a book with the Sadism of the early D.C. universe. The covers, especially, loved to play with your head and then the actual comic had a story not entirely leading to the cover at all.

You just want to find a D.C. writer from these salad days and ask them “what is your problem?” You can ask modern comic fans “remember when Superman tried to burn batman alive at the stake?” They’ll say “no I didn’t see Dawn of Justice.” They just don’t understand.

When superhero comics finally had to tone it down because moral guardians started gasping and popping their monocles, that’s when they went in the other direction and became lamer.

Here’s The Whizzer taking a yellow whiz. You’re welcome. That was at Marvel, but in the meantime at D.C. you had William Moulton Marston who created Wonder Woman to explore sadomasochistic philosophy. Don’t blame me, read the Wiki, he said so. Superman creator Joe Shuster also drew Nights of Horror, a fetish comic. I’m not making this up, as this NSFW link will demonstrate. There you think D.C. was all done being perverts and then you remember Catwoman! NSFW (boy howdy!) link. You had to wonder what was getting into people at D.C.

But when it comes to comics, you know who was really perverted? Dan DeCarlo who drew the Archie series. We can’t even go there because this post needs to be OK for the kiddies on this site lest we tick off our Capitalist overlords. If it’s not too late already.

Much more Dan DeCarlo covered (NSFW again) at Dangerous Minds, which is just the blog for this kind of stuff.

The Beatles had their own comic

The Beatles, in fact, were also an animated cartoon series. See for yourself:

For what it was worth anyway, which isn’t much. It’s just one more reason you don’t love Nelvana enough, because Clive A. Smith, who worked on this series and on Yellow Submarine, was one of the founders of Nelvana.

Educational comics were the pinnacle of dorkiness

Whether they were trying to give you dating advice…

There once was a time, many web-years ago, when I had a link to an educational comics archive that was just packed with goofy gold like this. It’s gone now. If anybody can recommend a new one, with just public service / government educational stuff, feel free to let ‘er rip in the comments.

That’s all I have today in Uncle Petey’s comics trunk. Maye that was fun enough to do again sometime. In the meantime, more vintage comics bloggage is available at these fine purveyors:

Ta ta, stay geeky out there!

What Others Are Viewing: